Thank you all for the wonderful job you have given me.

Seventeen years ago I bought the domain name allhatnocattle.net on Dec. 14, 2000. I decided on that name after watching Gov. Ann Richards on C-SPAN describe George W. Bush as, all hat no cattle. I burst out laughing. It was too long for my preference but oh, so descriptive.

What inspired me to begin a website was my shock and dismay at Gov. Jeb Bush, who broke his oath to uphold the laws of Florida, and ran to the U.S. Supreme court to stop the vote counting in Florida. States rights, my foot. It worked and the rest is history.

And guess what, my vote in my county in Florida was never recounted in 2000.

The Republicans grabbed Florida by the -----.

I began AHNC by posting silly gifs of Jeb, Dubya, etc.
The response was mind numbing. Not only was I one of the few political websites, I was a woman. The horror! I used to get a lot of threatening emails during the Bush administration, hardly any when Obama was president and not a single one since Trump took office. I think the trolls realized their threats can be traced back to them. So now they intimidate people online on social media or in the comments section -- but not my comments section. 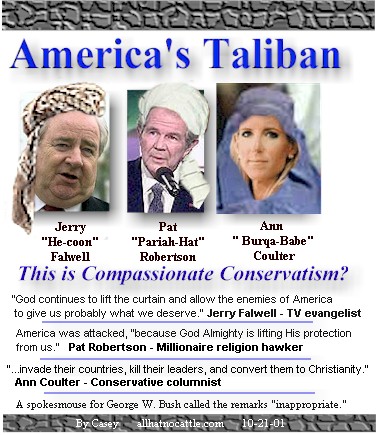 I'm so old I remember when George W Bush called himself a COMPASSIONATE CONSERVATIVE . Those who were tortured disagree with that moniker.

It's the lack of empathy from "Christian" conservatives across this country that has gotten us into one avoidable mess after another from invading the wrong country for 9-11  to the current mess in Alabama where Evangelicals supported a child molester.

Using the name of God, no matter what your religion is, to spew lies and hate, is not a religious act, it is political act.


Our forefathers had it right, the separation of church and state. 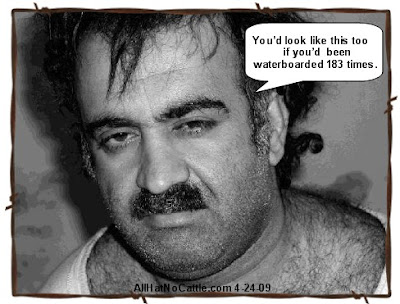 By the way, I never thought George W Bush planned 9-11. My take:

9-11 gave Republicans an enemy all Americans could fear --  terrorists -- and they took full advantage to this very day. They also made torture palatable during that time. 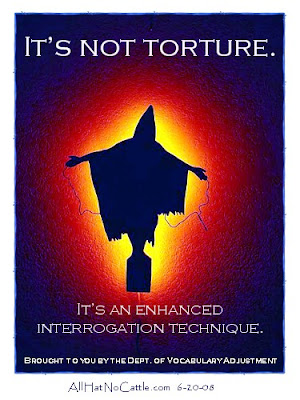 AHNC has tried over the years, to make the Republican message understandable through comedy. It takes a lot of work searching for humor to fill AHNC, but the truth is, that is what I'd do with or without AHNC. I need humor to mask my pain. Don't we all?

You all helped me fight cancer when I was diagnosed in 2009. I was without health insurance and made my way to Costa Rica which provided health insurance for pre-existing conditions. Your financial support made my struggle so much easier and for that I am eternally grateful. You literally saved my life. I would have died in the USA.

You all also helped me when I was falsely accused of crimes by my husband, in Florida and Costa Rica. That is one of the reasons I am a Hillary supporter, I know what it is like to be falsely accused with no evidence and had to spend tens of thousands of dollars to address those false claims.

I hope you all saw the clip of Joe Biden comforting Meghan McCain.  That was so human, it brought tears to my eyes. That's the America I love.

In the years I have been online I have watched the right wing attack the military service of John McCain, John Kerry, Max Cleland and even Tammy Duckworth. And Fox News coupled with right wing radio, led the way. They tried to destroy Obama and Hillary and any Democrat they could. Very un-Christlike behavior. 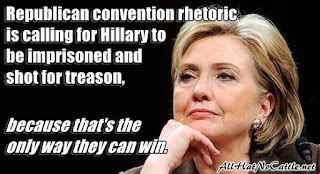 The USA needs an Empathy Renaissance from the "Christian" conservatives aka Republicans. Their tax cut will harm those who need it most and help the ultra-wealthy. They're not going to change any time soon but they can be voted out of office or not voted into office at all, which happened in Alabama. Alabama!

Thank you Alabama and thank you to the Washington Post who outed Roy Moore.

America is now rejecting the sexual abuse by those in power. And women are rejoicing. We have come a long way, baby. Finally.

AHNC has had the great pleasure of servicing your humor needs. It has been my source of sanity during every nervous breakdown and panic attack I had personally or politically. 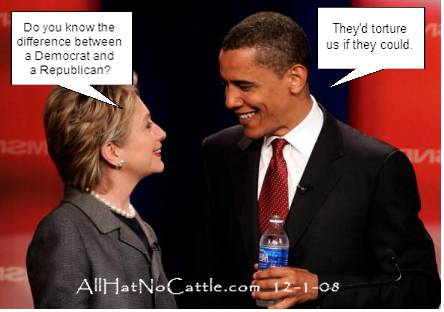 
I will be back online Monday, December 18.

Peace and love to all.