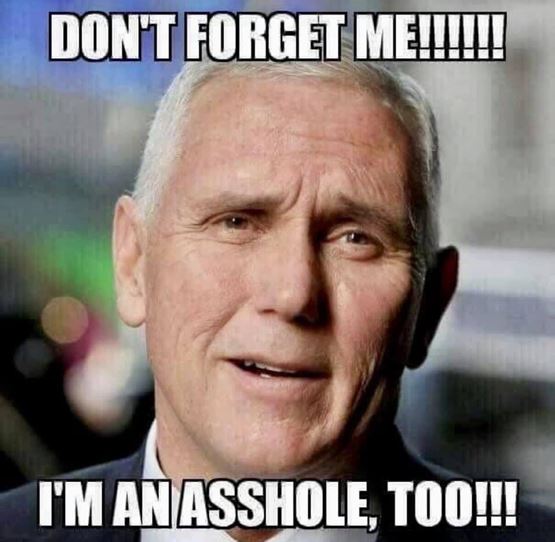 White House announces coronavirus 'coordinator' to lead response under Pence
Ambassador Debbie Birx, who will report to Pence, serves as the U.S. government's leader for combating HIV/AIDS globally, according to the White House.


Wow, Pence is the Coronavirus Czar. Does he include Gay Conversion Therapy?


So the guy who said Mexico would pay for the wall and Putin didn't meddle and Kim was giving up his nukes and Bone Saw Arabia didn't kill a journalist and trade wars are easy to win just assured us that the coronavirus is no big deal. I feel so f--king much better now, don't you - Jeff Tiedrich 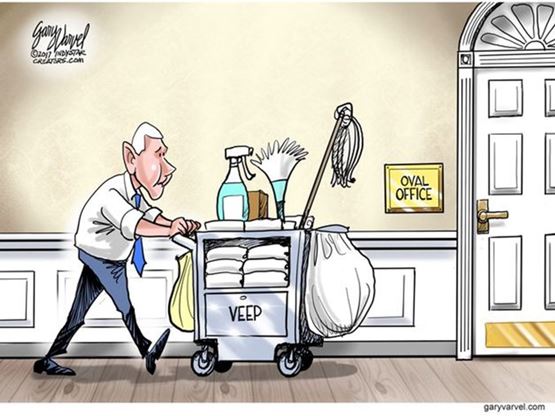 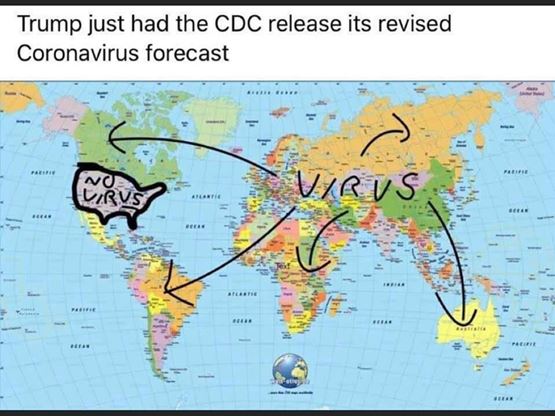 Q: What would you do if President Trump loses the election but refuses to concede?

Joe Biden: "I have no worry about him being escorted out of the White House" 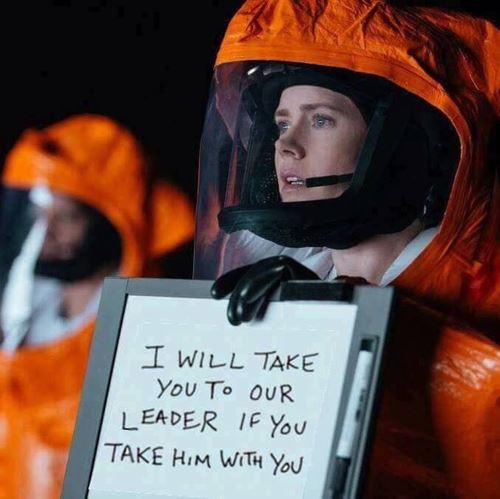 Trump got pissed off at the coronavirus and fired it. So don’t worry. It’s gone. it has learned what happens when you make Mr. MAGA mad. - Stephen King 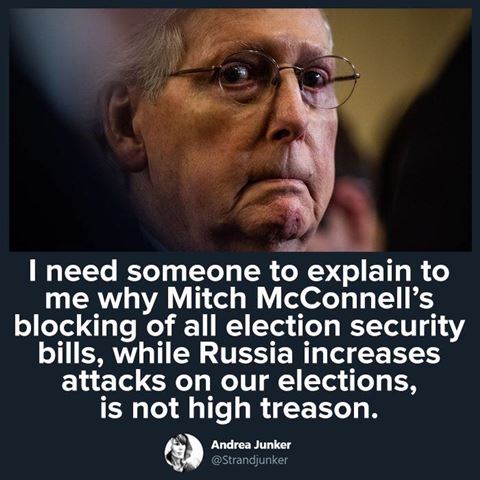 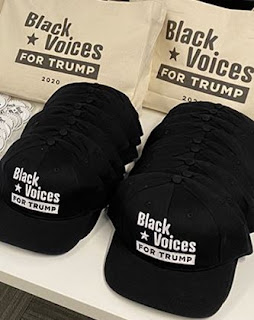 After November These Will Be In Every Dollar Tree Across The Nation
President Donald Trump’s outreach to African American voters is coming to a storefront near you.
As part of an ongoing effort to increase Trump’s share of the black vote this fall, the president’s reelection campaign unveiled plans on Wednesday to open a series of “community centers” in empty retail spaces across the U.S. where paid staffers and volunteers will spend the next several months courting black voters with literature, celebrity meet-and-greets and “woke”-branded attire.

Putin is seriously the worst president since Cheney. - John Fugelsang


I am the walrus
Goo goo g'joob 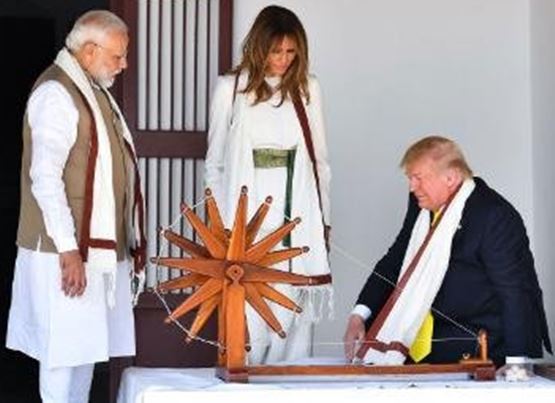 Bernie Bullies With a Bullhorn
Cops called on Bernie backers after bullhorn protests at officials’ homes.The late-night tactics at private residences come as Sanders' opponents are increasingly calling out his supporters' behavior. 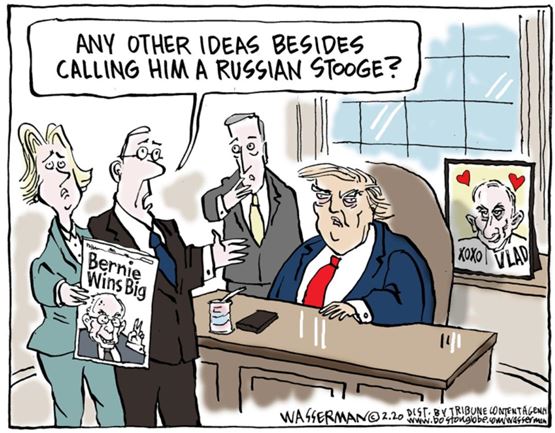 Email from a Bernie Bro

Your recent post: "Florida Dem Mocks Bernie Over Castro Praise
A Democratic Florida lawmaker is likening Sen. Bernie Sanders’s (I-Vt.)
comments about former Cuban leader Fidel Castro to President Trump’s widely
criticized response to the Charlottesville, Va. protests.
“Saying a murderous dictator wasn’t so bad because of a literacy program is
like saying ‘there were very fine people, on both sides,’” state Sen.
Annette Taddeo tweeted Monday.",...was so ironic I felt I had to write.
I've just finished a book, "The Havana Mob", detailing America's foul
behaviour in Cuba over a hundred year period. Supporting murderous
dictators, U.S. government-backed corporate theft, Mafia casinos and
brothels, the exploitation and prostitution of the poorest Cubans, murder
of opposition members: there really was no crime too heinous for the U.S.
to take part in or sanction 'til Fidel threw you out.
So an when an establishment democrat rubbishes Bernie for pointing out that
the social services are better in a third world country that the U.S. has
kept that way for a century, you think it appropriate to publish it, along
with the rest of your anti-Bernie posts. you're wrong about Bernie, Lisa
and your mis/disinformation about him is doing your birth country a
disservice. Or, like Drumpf, are you trying to tear the place to pieces?


Hi Wal from Australia. I hope Australia heals soon from all the bush fires.

I grew up in Ft. Lauderdale, FL. around kids whose parents fled Batista's corrupt regime which made all those dirty deals with dirty Americans. I hid under my desk at school with dog tags hanging around my neck doing drills in case a Russian nuke was hurled at us from Castro's Cuba 120 miles away.

What good is Castro's healthcare/literacy to those unknown thousands who were murdered or tortured?  Rep. Taddeo was right and Bernie may lose Florida if he continues on the pro-Castro path.

I haven't read "Havana Mob" but I lived it in South Florida and read the Miami Herald's coverage of Cuba and the Mafia for six decades.

Wal, you know how I choose a candidate? By their accomplishments and voting record. It is that easy for me. Bernie has no accomplishments and his voting record is pro-gun and pro-Russia. And he's not a Democrat. So he was always a no vote from me and most Democrats. But, if he wins the primary I will support the Democrat's choice unlike Bernie Bros in 2016.

Bernie is All Talk No Walk. Just as Bush was All Hat No Cattle. People pretending to be something they are not.

The next president needs to have the expertise and world wide connections to mop up after Trump and the GOP. We do not need another "D.C. outsider experiment"  who yells a lot and has angry followers.

Yeah, Wal, I'm tearing apart the country like Drumpf by pointing out Bernie's inadequacies. Seriously Wal? After Bernie says he wants to burn down the Democratic Party for the past 20+years and wants my vote?

You Bernie Bros are all alike, you go for the jugular but you trip on your dick. 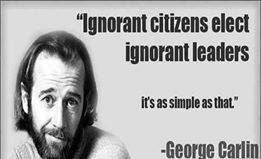 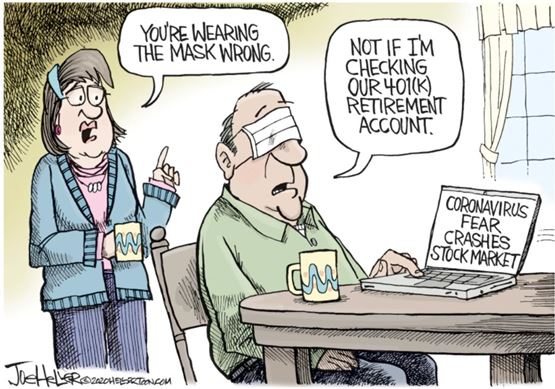 Phone Battery Fire On Flight To Bahamas
A battery charger combusted on a United Airlines flight, alarming passengers and resulting in an emergency landing on Wednesday.
United flight 1456 was en route from Newark, N.J., to Nassau, Bahamas, before the plane diverted to Daytona Beach Airport after one passenger's phone battery charger caught aflame during the flight,

Several people asked where the heck are the 16 circles in this graphic I posted the other day.
Hint#1. Look at the vertical bars in between the rectangles
Hint#2. Look at the red dot and the circle will appear shortly 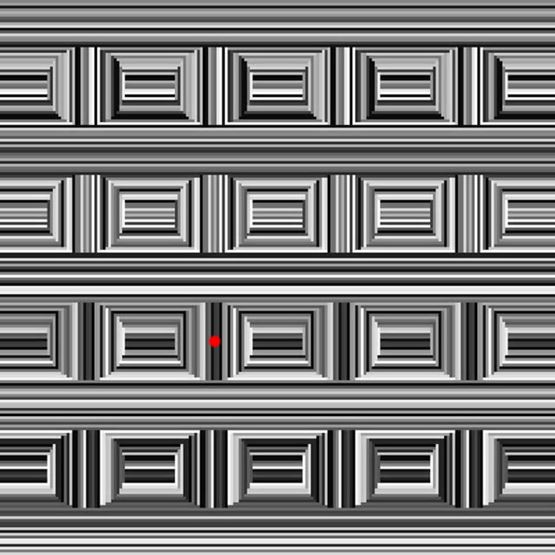