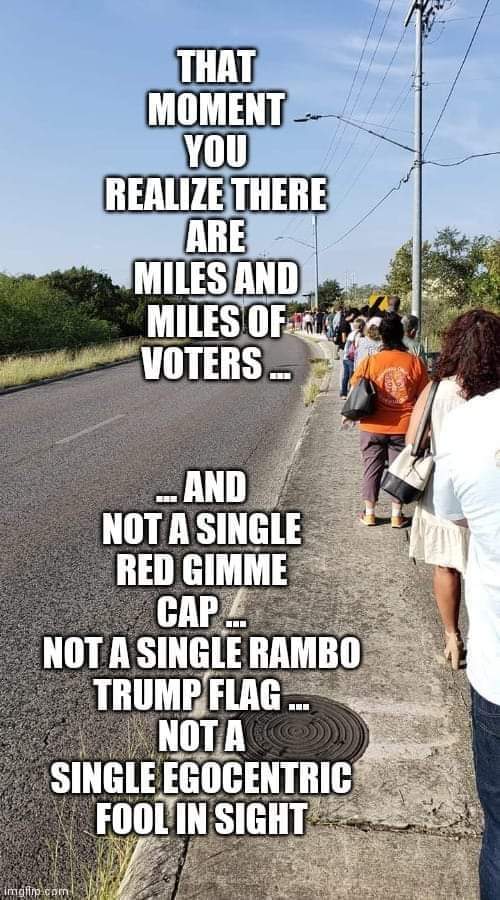 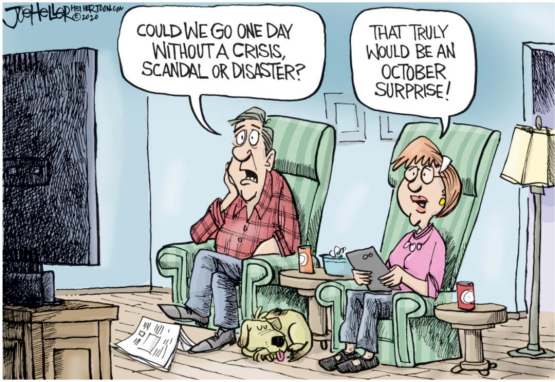 "I turn on the television, they talked about your floods in Iowa. They talked about how Iowa is doing the crops…. 3-4 stories one after another… Where is my Nobel Peace Prize that they don’t talk about?"
-President of stupid people w/no empathy,
last night,
to actual Iowans.
- John Fugelsang 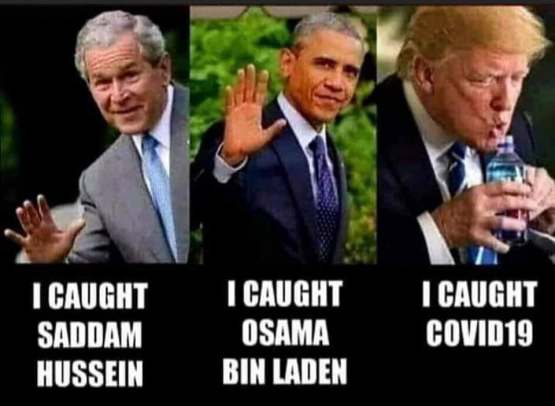 Well, This Hunter Biden Accusation Crashed And Burned
The Rupert Murdoch-owned New York Post published a series of stories on Tuesday surrounding alleged emails between Hunter Biden and officials connected with the Ukrainian energy company Burisma, which the outlet obtained from a source who met multiple times over the last year with an individual whom the U.S. Treasury Department has sanctioned as an active agent of Russia. 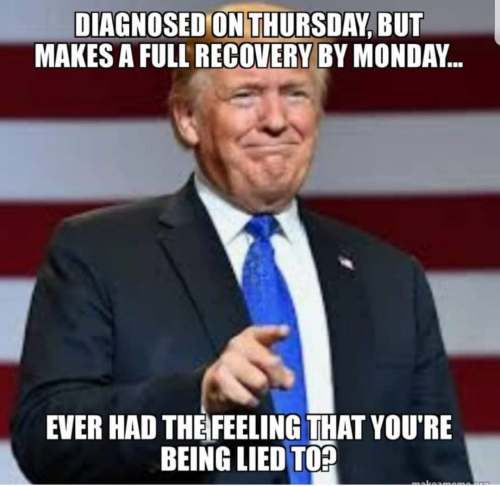 Barron was also infected with Covid, according to his mother Melania. I suppose it was only a matter of time before Donald got around to endangering one of his own children. - Bette Midler 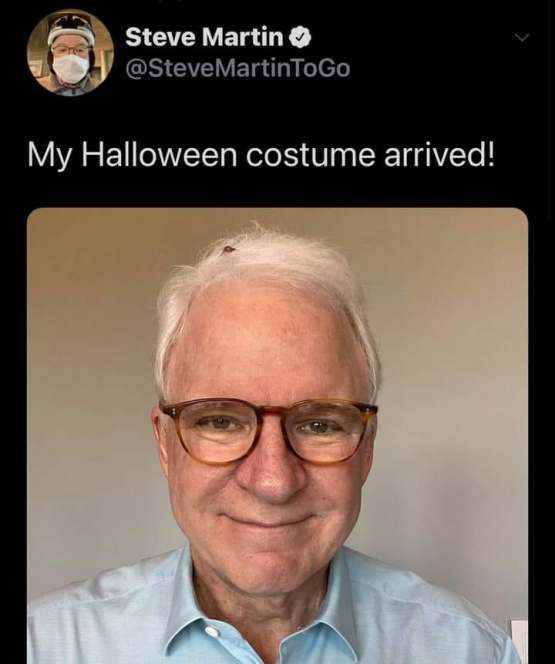 Awww, Bill Barr Is Suing Melania's Former Advisor. How Nice Of Him.
The Justice Department on Tuesday sued Stephanie Winston Wolkoff, a former adviser and confidant of first lady Melania Trump, alleging she breached a nondisclosure agreement when she published a scathing tell-all about her experiences inside the East Wing earlier this year.
Though she only served in the White House briefly, DOJ says her non-disclosure agreement "included no termination date," a notable restriction that Winston Wolkoff is likely to challenge on First Amendment grounds. 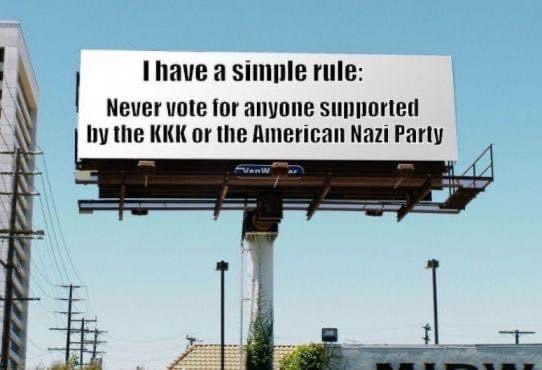 My Take On Amy Coney Barrett's Catholicism
____________________________________________________________
Her type of Catholicism is not mainstream. I believe there are two types of Catholics -- the Christlike type Pope Francis represents and the unChristlike Pope Benedict represented. In other words, one is against poverty, pedophilia and child abuse and the other isn't.
The evangelicals came about for a reason in the 1600s. The Catholic leadership from Rome was similar to Trump -- gluttonously enriching themselves. Hence, a plethora of evangelicals left the Catholic Church and formed their own Christian religions. Lutherans, etc...
And now some of those same evangelicals became "evilgelicals" here in the USA at the highest levels of government going back centuries. They fought for their God to be in the US Constitution and lost. They beat slaves on the head with the Bible. They pushed to change the USA motto and won, for crying out loud.  And now they literally house many GOP US Congressmen in DC on C Street for near nada. The evilgelicals own the GOP.
I had a wonderful experience in Catholic grade school and one year of high school. But I knew many who didn't around the US. One went to an all-male Catholic High School in a major city. Very prestigious. The Brothers beat the crap out of the students. Some were forced to get in the boxing ring to fight with a Brother who was a past Golden Gloves champ. Yeah, just what Jesus would do.
Guess which category Amy Coney Barrett falls into? 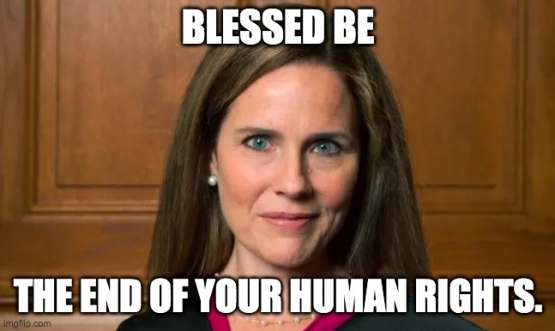 Donald Trump talks more about Joe Biden’s son than he does about any of his. - Windsor Mann 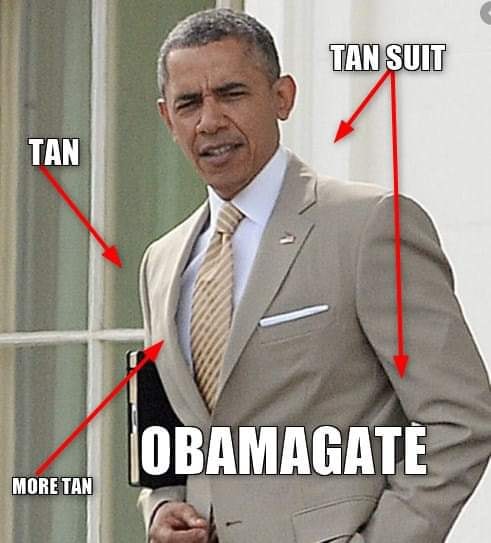 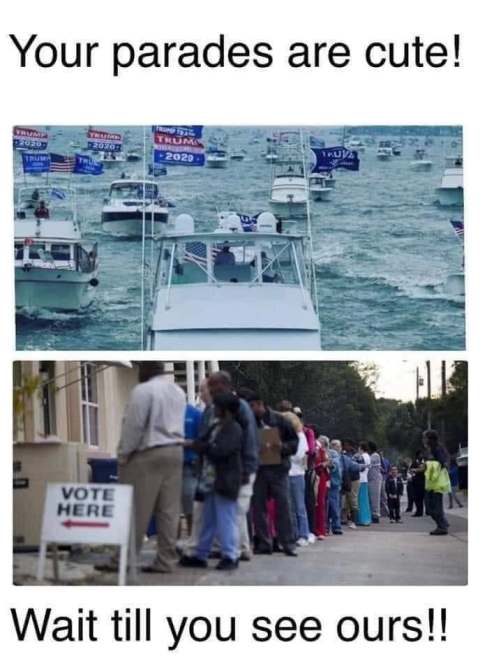 When All Else Fails, Use The Mocking Technique!
Donald Trump mocked Joe Biden at a rally in Des Moines, Iowa as he did a bizarre impression of his rival for the White House.
Mocking the idea of the Democrat trying to make a decision, Mr Trump held his arms tightly against his body while repeatedly jerking his right shoulder upwards as if he was stopping himself from raising his hand. 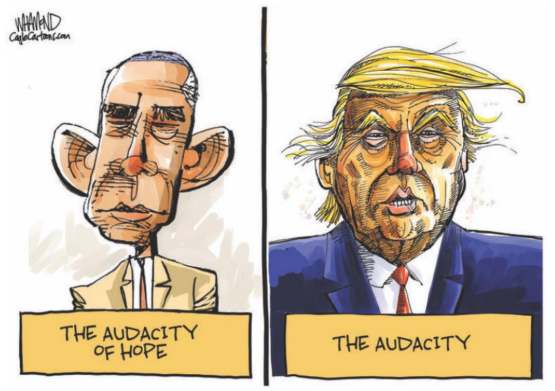 If pregnancy were contagious we’d have absolutely no trouble convincing men to wear a fvcking mask. - emrazz tweet 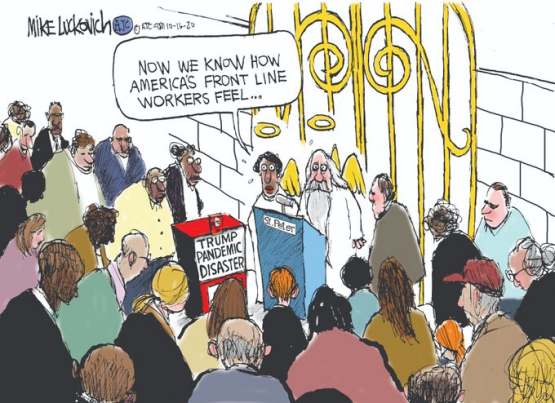 Oil prices are now low enough for more Americans than ever to live in their cars. - The Onion 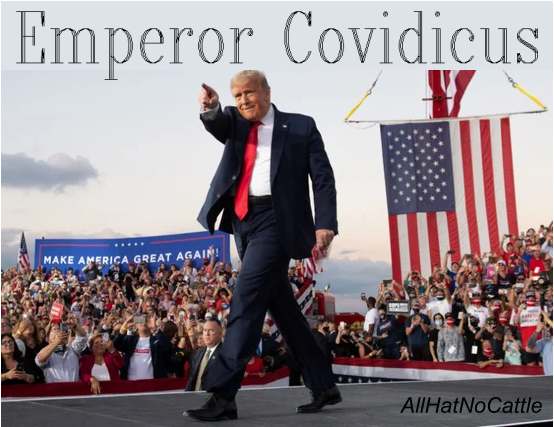 Trump Says China Will Pay For The Coronavirus Relief Package. Yeah, And Mexico Is Paying For The Wall.
President Donald Trump seemed to say that China will inevitably pay up for America’s coronavirus relief package if fiscal negotiations with Congress ever see a breakthrough.

Just got really jealous my cat knows nothing about the election. - Kumail Nanjiani 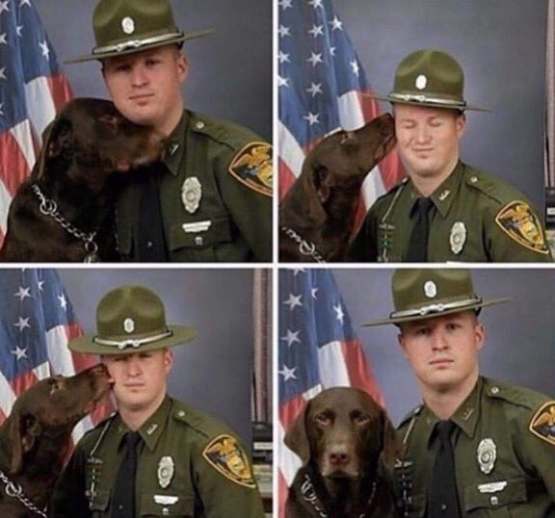 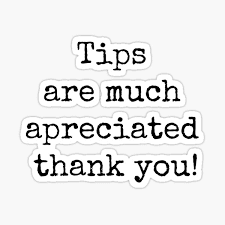