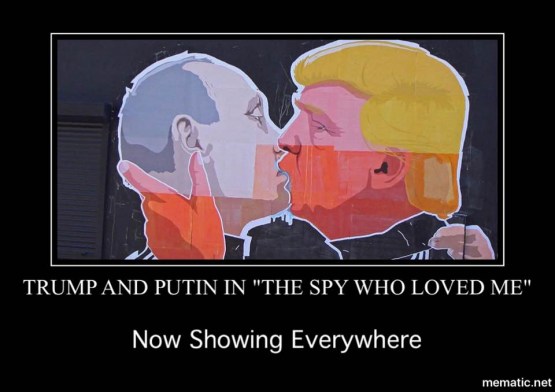 Intel officials told senators Russia wanted to pin election meddling on Ukraine
American intelligence officials have told senators and their staff in recent weeks that Russia conducted a years-long effort to point the finger at Ukraine for its own interference in the 2016 U.S. presidential election.


I'm so old I remember when Russia had nuclear missiles, 90 miles from the US coast pointed at us. Everyone knew Russia was the enemy. How low we have sunk with the Russian Republicans. 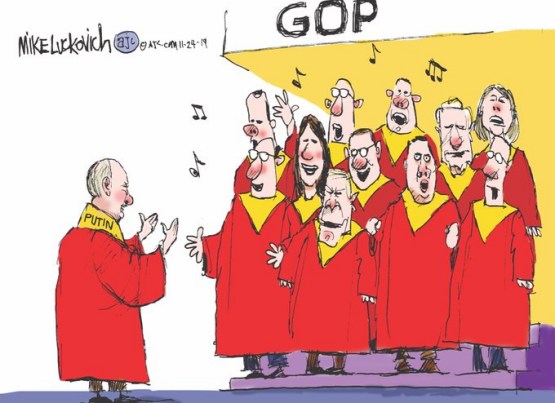 I need one reporter to ask trump if he’s going to withhold aid from Israel over corruption. - Adam Parkhomenko 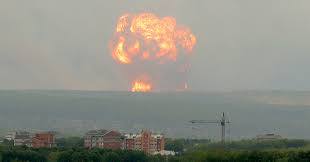 Putin Brags About New Weapon. Grab the Kids and Run!
Russian President Vladimir Putin has told the families of the scientists who were killed in a nuclear explosion in the country's Arctic north they were testing an "unparalleled" weapon.
There was much speculation about what caused the blast at a test facility in Nyonoksa in the Arkhangelsk region on August 8, which killed at least five people and sparked local fears about increased radiation levels and the secrecy surrounding the incident.
International experts believed the explosion involved the Burevestnik nuclear-powered intercontinental cruise missile, which NATO calls the SSC-X-9 Skyfall. 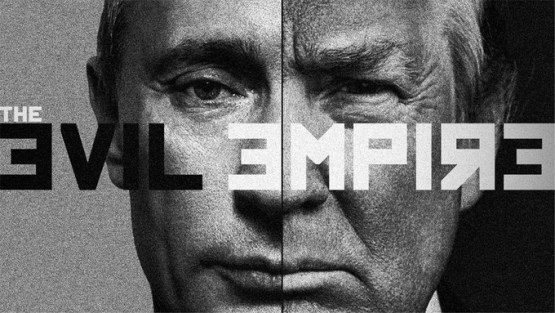 yes tell me how lifelong Republicans in the FBI plotted with Ukraine and Hillary to lose her own election so that Trump would win so that then the deep state could take him down while framing Russia for it and also something something Crowdstrike too because why the f*** not derp. - Jeff Tiedrich 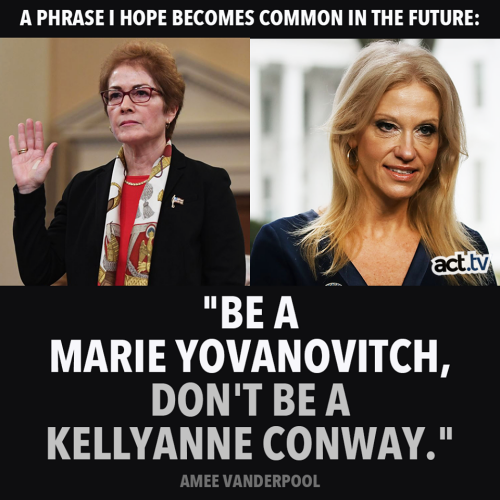 Waiting for GOP to accuse Fiona Hill of being a British spy because she speaks with an English accent. - Asha Rangappa

Barr Blames Epstein Suicide on Screw Ups With a Straight Face
Attorney General William Barr said he initially had his own suspicions about financier Jeffrey Epstein’s death while behind bars at one of the most secure jails in America but came to conclude that his suicide was the result of “a perfect storm of screw-ups.” 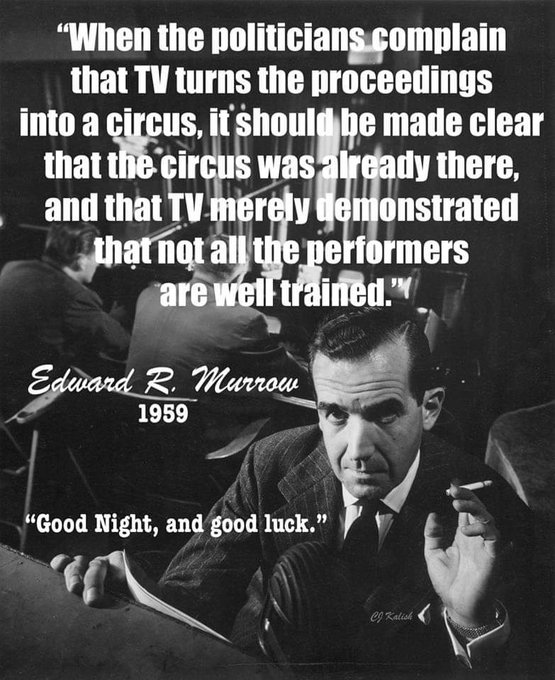 The question is not whether Trump has committed impeachable crimes. He has.

The question is whether Republicans in Congress will affirm that an American president is not above the law. - Hillary Clinton 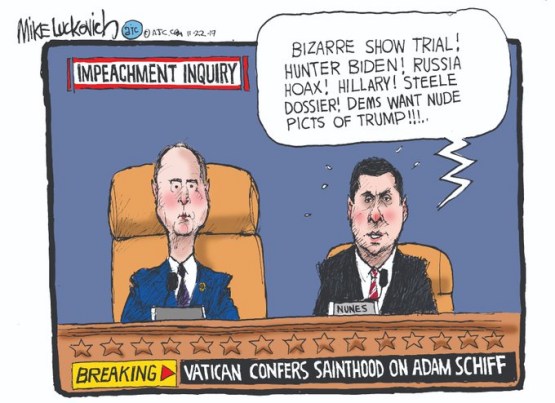 Next week, Roger Stone is going to sneak into the White House wearing a turkey costume in the hopes of a quick pardon. - Roland Scahill 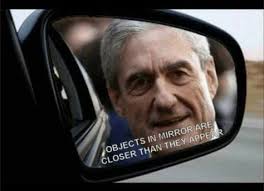 The Mueller Report Returns
Now that the Ukraine hearings are over, Democrats want to hold at least one Mueller-related impeachment hearing on Trump's possible obstruction and perjury. 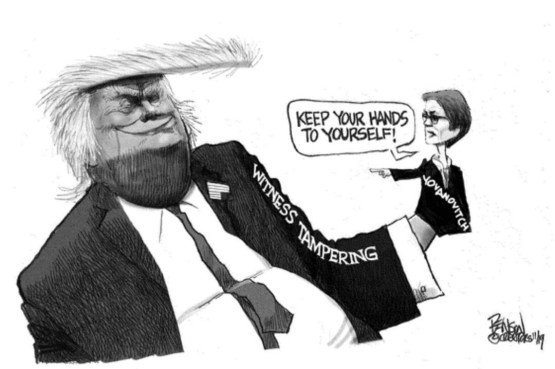 The kompromat they have on Lindsey Graham would singe your eyebrows off. - Jeff Tiedrich 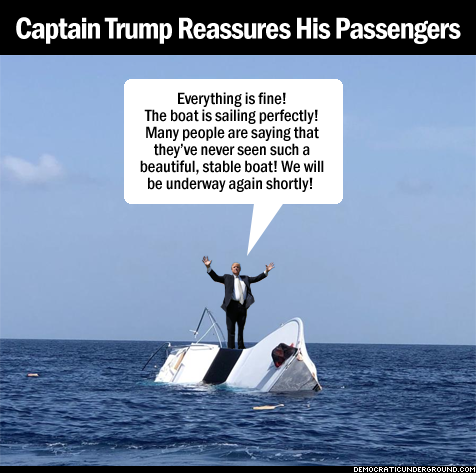 “Hello, my name is Devin Nunes; and I’m here to read an outraged monologue off this here piece of paper in front of the cameras so right-wing media can show their audiences a news clip from today’s hearing.” - John Fugelsang 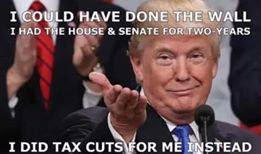 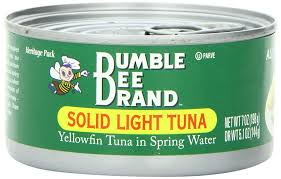 Tuna Cartel Leads to Bumble Bee Bankruptcy
Tuna maker Bumble Bee Foods said Thursday that it has filed for Chapter 11 bankruptcy protection, with an agreement from Taiwan-based FCF Fishery, its largest creditor, to purchase its assets for roughly $925 million.
The bankruptcy proceedings are meant to reduce Bumble Bee’s debt burden caused by “recent and significant legal challenges” and help facilitate the sale. In 2017, the company pleaded guilty to price fixing and was fined $25 million for forming a cartel with Chicken of the Sea and Starkist. It still owes $17 million to the U.S. Department of Justice, according to its bankruptcy filing. 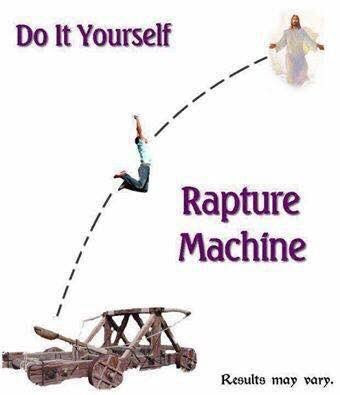