Trump, still infectious, is back at the White House — without a mask 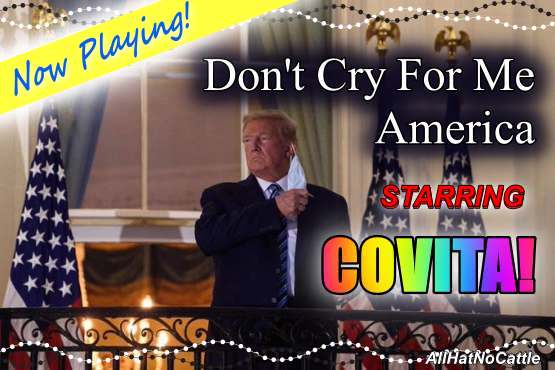 Trump, still infectious, is back at the White House — without a mask
President Donald Trump staged a dramatic return to the White House Monday night after leaving the military hospital where he was receiving an unprecedented level of care for COVID-19. He immediately ignited a new controversy by declaring that despite his illness the nation should not fear the virus that has killed more than 210,000 Americans — and then he entered the White House without a protective mask.
So why didn't Melania appear on the balcony to welcome Trump back from Walter Reed Hospital?

Just fell out a 50th story window and so far so good! feels like flying. don’t be afraid of falling out of windows, - Sarah Lazarus 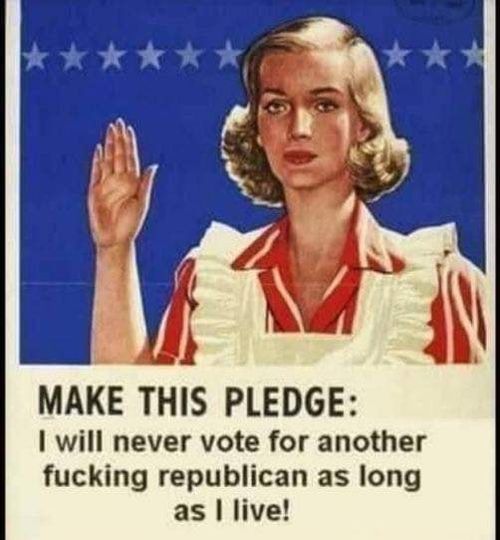 Oh my god, when they said Trump would kill the republican party, they meant... literally. - Sarah Cooper 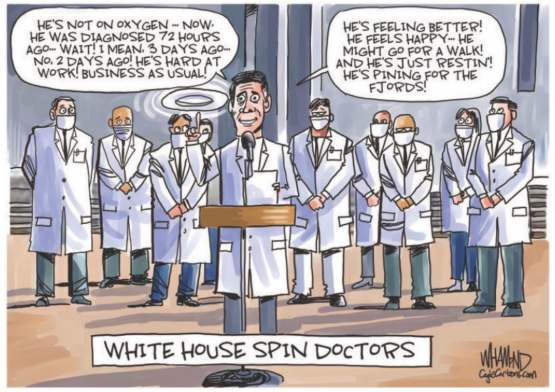 Shooting Infecting The Messengers
White House reporters are increasingly anxious and angry about the Trump administration's handling of COVID-19 cases within its own building.
State of play: Several White House reporters have tested positive and many are trying to figure out whether they and their families need to quarantine.
"My wife has now tested positive for COVID. The collateral damage is going to be pretty significant I think."— N.Y. Times White House correspondent Michael Shear in an interview with Axios

It feels like we're approaching the "gathering at the Jonestown pavilion for some grape Kool-Aid" part of all this. - Rex Huppke 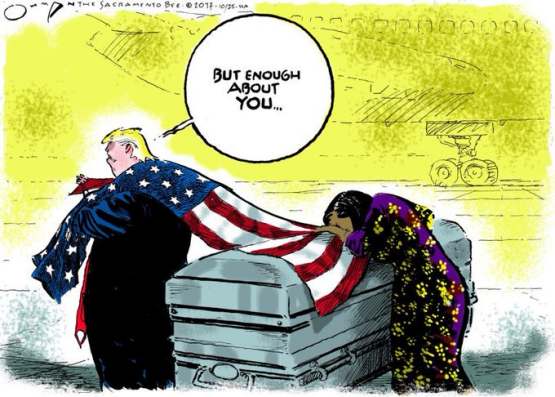 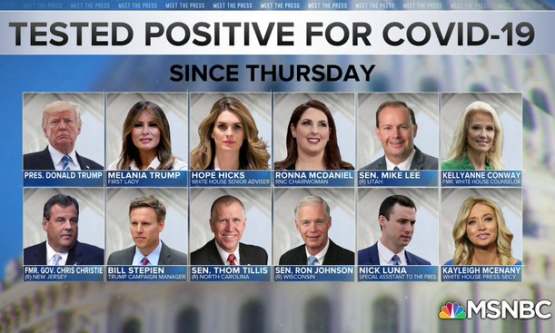 Claudia Conway is like if Deep Throat had a TikTok and began every video with "what's up, this is Mark Felt, here's some secrets." - Claire Willett

Did Kellyanne Conway Infect Her Daughter After Attending The Rose Garden Massacre? They're Arguing On Instagram.
As President Donald Trump continues his recovery from COVID-19, and the White House and Trump's doctors provide conflicting reports about his condition, a surprising new source about how the POTUS is really faring has emerged on TikTok. Claudia Conway, Kellyanne Conway's progressive 15-year-old daughter, made it clear in her posts that actually, Trump is not doing as well as he's letting on. 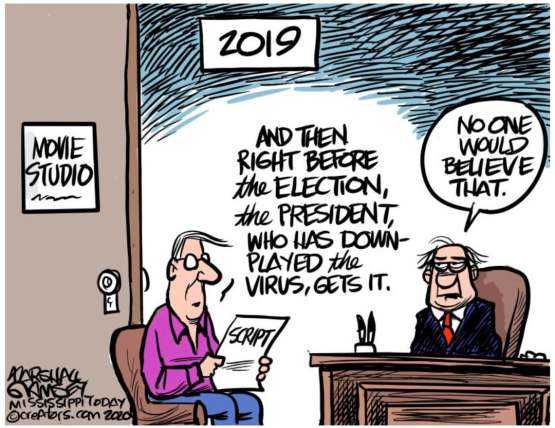 One Of The Last Decent Republicans Thinks We Are In The Grips Of A Madman
Longtime presidential advisor David Gergen, who has worked in four different White Houses, pulled no punches in describing President Donald Trump’s reckless behavior flouting CDC guidelines and dismissing the Covid virus currently infecting him, saying that the country is now “in the grips of a madman.” 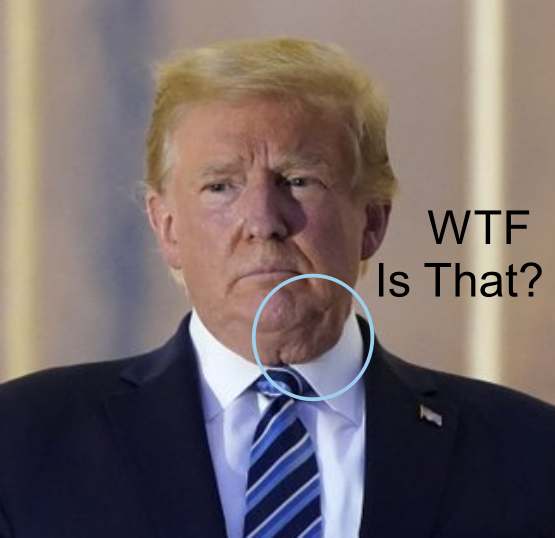 This election isn’t just about beating Trump. It’s about beating him so badly, so mercilessly, so overwhelmingly that his craven GOP enablers and the neo-fascist racists who answer his dogwhistles crawl far and deeply back into the fetid muck where they belong. VOTE. - George Takei 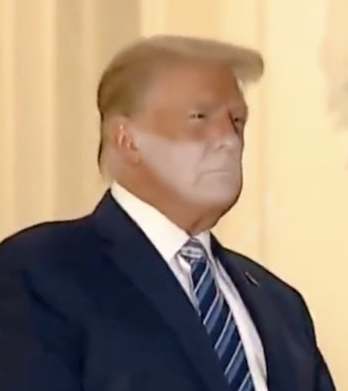 Pence Grateful That Plexiglass Shield at Debate Will Protect Him from Woman. - Andy Borowitz

Raise your hand if you think he's going back to the hospital in a wheelchair or on a stretcher. 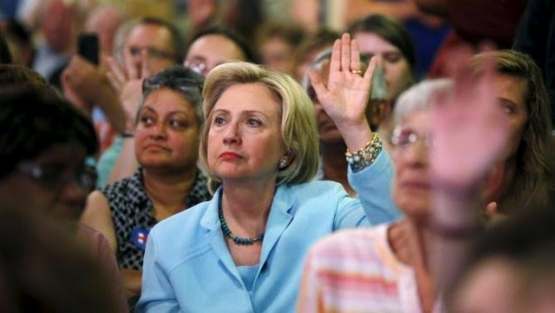 My father died of Covid alone in a hospital. I had to say goodbye to him over a phone. Trump got a joyride to sooth his desperate need for attention, while endangering the lives of the Secret Service people in the car with him. To hell with him and all who enable him. - Curtis Armstrong 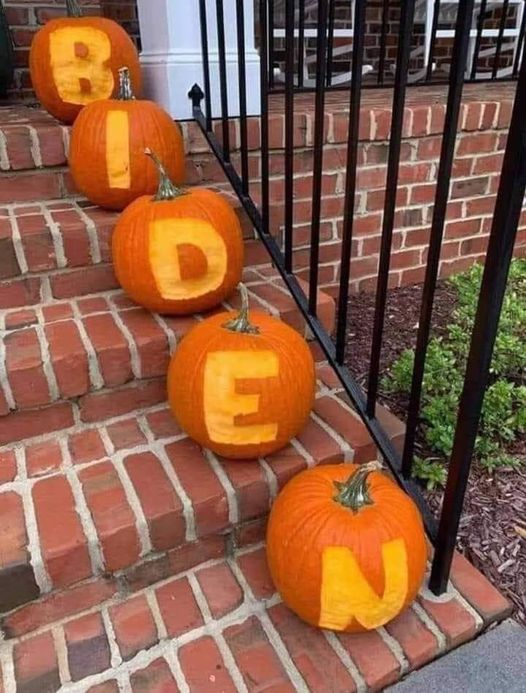 Trump somehow managed to even fvck up getting sick. - Andy Borowitz 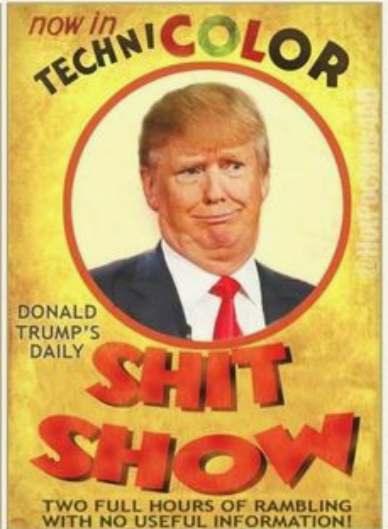 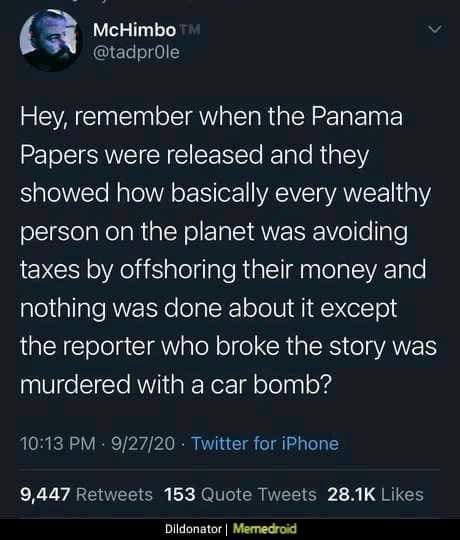 Ask not for whom the dumbbell tolls. - Dan Rather 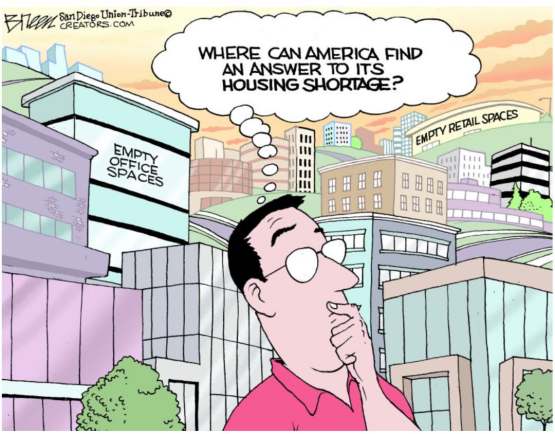 Trump Trade Deficit Climbs 5.9%
The U.S. trade deficit in goods and services rose 5.9 percent in August, climbing to its highest level in 14 years, according to data released Tuesday by the Census Bureau.

Folks, we can save nearly 100,000 lives by the end of the year if everyone wears a mask in public.
Do your part. Protect your neighbors. Wear a mask. - Joe Biden 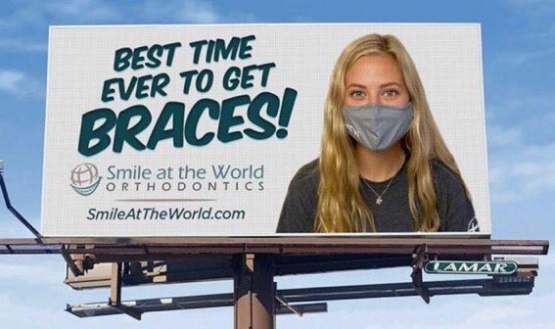 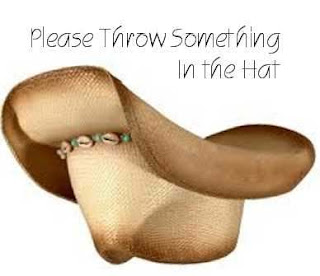 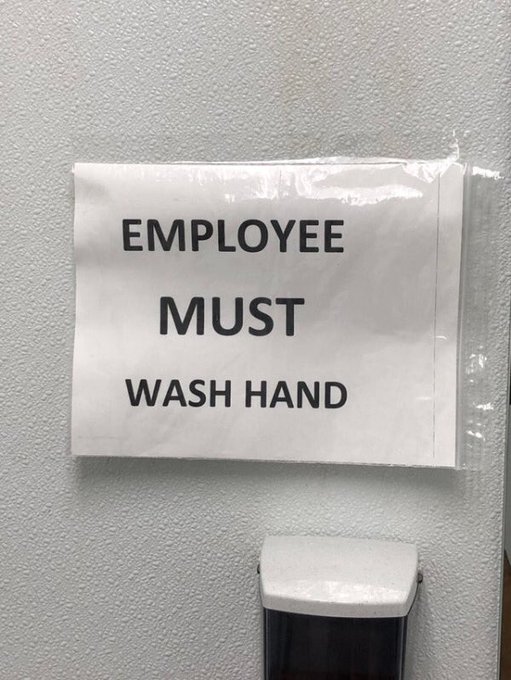 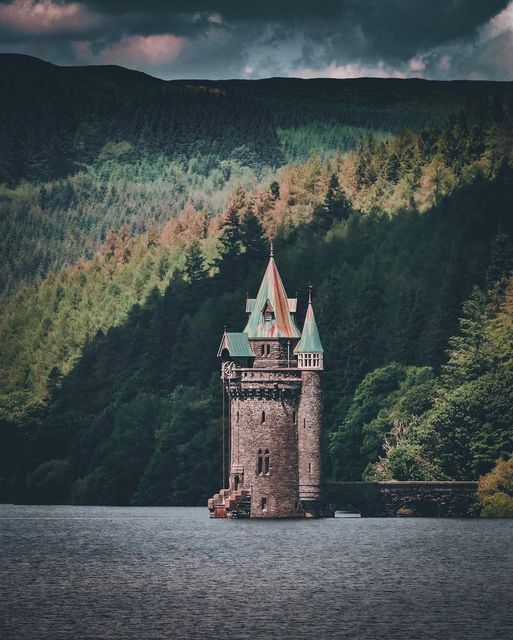 A watchtower on Lake Vyrnwy in Wales. My first thought when I saw this photo was the song by Jimi Hendrix, Along The Watchtower.
Peace.
Posted by Lisa at 1:47 PM